Potential rent: previously rented out at $1100 per month
Foundation has been updated, new sump pump, new roof. The third bedroom doesn’t have a permit on it and the city of Southfield requires it in order to be considered a bedroom.

Garage: 2 car detached
Tenant: tenant lease is expired, tenant is in the process of moving out.
Rehab: bathroom needs to be finished, patch ceiling in the upper unit, add beam/studs in the upper bedroom, obtain permit and correct issues as needed.

Must apply for and receive a Certificate of Occupancy from the City of Southfield
When this certificate is issued, the city will cut the approximately $1,400 lien in half.
In 2013, damage from a cooking fire in the kitchen was repaired. The individuals who performed the repairs pulled a permit, but the city has informed me that the walls were closed prior to the final inspection having occurred. Thus, the permit expired without a final inspection having been performed. Thus, a new fire repair permit needs to be pulled and a final inspection must occur. For this inspection to occur, a wall or two in the kitchen area must be opened up and then closed after the inspection.

Before the roof was replaced, water leaked into one panel of drywall on the second floor. That panel of drywall was pulled out, but has not yet been replaced.  The first floor bathroom is incomplete.

When the foundation was repaired, flooring on the first floor suffered slight bowing. Thus, replacing the flooring on the first floor might be desired.
The third floor was converted into a bedroom with a half bath at some point in time, but said work was not permitted. The bathroom fixtures were therefore removed. It might be beneficial to simply obtain a permit for the addition and reinstall the half bathroom upstairs. 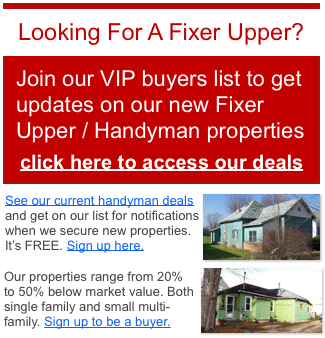 Hear What Others Have To Say…

A special thanks to The Detroit Property Shop for helping me complete my first real estate investment deal in a state I don’t reside in. You made being a long distance investor manageable and convenient.

Ms. Denson is a very busy woman and she took time out of her schedule to show my family the city of Detroit and all it has to offer. Truly a one stop shop for all of your real estate needs in the City of Detroit. Much appreciation and respect to you.

Thank you for your time,